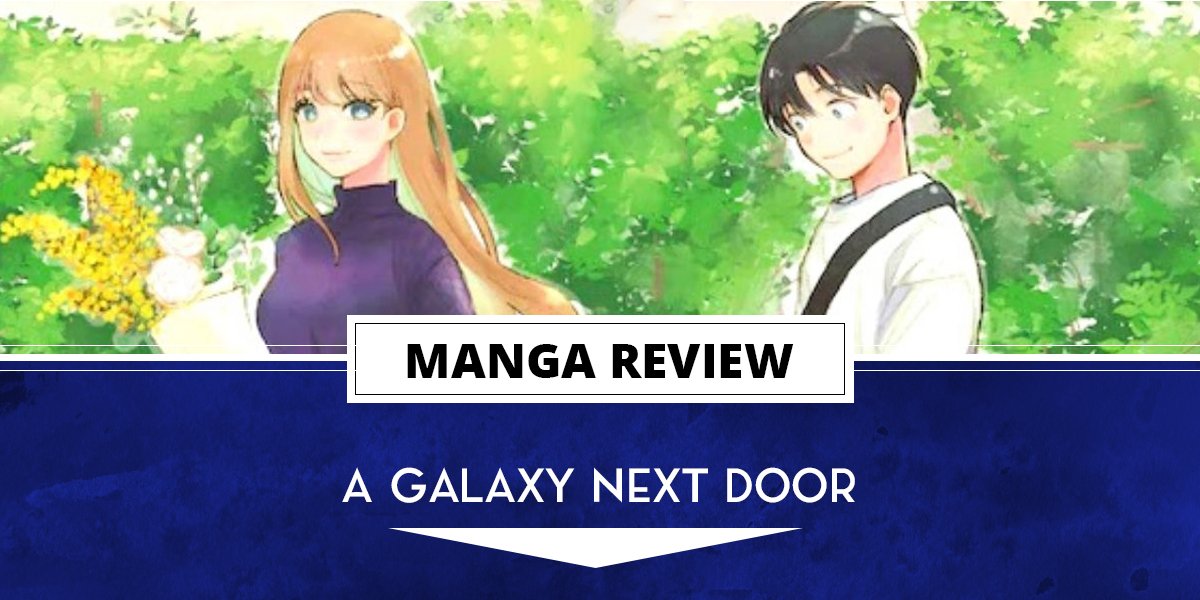 A Galaxy Next Door Vol. 2 – The outer refuge

In the second volume of A galaxy nearby, the manga-making aspects of the series take a back seat as Goshiki and Kuga focus on developing their relationship. After the first volume where our confession happened, I wondered how they were going to continue the story since all the major points had been touched.

The answer was through episodic chapters!

First they went to the zoo where they became fascinated with giraffes, then Goshiki sought to expand her skills as an assistant. She landed a job with a manga artist named Sano who happened to be one of Kuga’s former assistants. Afterwards, they visited the grave of Kuga, Fumio, and Machi’s father to pay their respects. Then… it’s vacation time and a visit from Kuga’s cousin, Chihiro! Finally, we head to a hot spring where things take a strange turn when Goshiki gets a call from his mother back on the island!

While things were rather episodic, there was one common theme throughout the volume and that was Goshiki and Kuga’s deepening feelings for each other. Additionally, Goshiki debated whether or not she should keep her background to herself or let others know the secret that she is a special alien princess. It all made for a rather cute volume that took us deeper into the two main characters!

The focus here was on Kuga and Goshiki as they deepened their relationship. Later in the manga, Kuga even wonders whether or not they should seek help from Goshiki’s home island to lift the marriage curse between them. While we ended up with a confession of love in the first volume, here we found ourselves practically with them in marriage proposal! Talk about accelerating a relationship! Although… I have my suspicions on this aspect.

Sano looks like a background character. All we really know is that he was Kuga’s assistant and now he’s a manga author who’s about to debut. Goshiki helps him but there was a little misunderstanding at first between him and Kuga. Sano thought Goshiki was in love with Kuga so he tried to be sneaky and tell him about it; however, Kuga dropped the bomb on him that they were already dating! Other than that and a quick Christmas visit, there wasn’t much to her character yet.

Chihiro seems to get a bit more involved. As she visited them for Christmas, she ends up saying to have a slumber party and talk with Goshiki some more. Here they develop cute nicknames for each other and start to bond. Goshiki tries to talk about her past but Chihiro tells her it’s okay to have secrets…and then makes a point of saying that even she has her own secrets…some that even Kuga doesn’t know. .. (The plot thickens!). This made her a much more interesting character as it definitely sows the seeds for future plot points!

It seems like this series has settled into your typical love story… and that’s okay because what we get here is still very interesting. I really like Goshiki as a character, because she seems very trustworthy and easy going, but she’s still so shy and insecure about things. Also, since she’s been isolated on an island this whole time, she’s very naive about some things, which adds to her cuteness.

I also like how Kuga is the kind of character who takes charge of a lot but does it in the most nonchalant way possible. He kind of goes with the flow but does whatever is needed when needed. Additionally, he also shows his own shyness and insecurities when he begins to think about his feelings for Goshiki. They really balance each other out.

With Sano and Chihiro entering the picture a bit more, it makes the cast quite complete. I don’t know if this series will introduce new characters later on, but I really appreciate the small casts that take up the majority of the attention. It’s another series that doesn’t really need a third wheel to try and get in the way. Just let everything breathe naturally and let things fall into place. So far, this series does just that, which is why it’s becoming such a great read!

I’m sure Goshiki and his mother will have even more time to shine in another volume because there’s this whole side of Goshiki that has yet to be fully explored. It should also be really interesting when the time comes! My bold prediction is that this series will end with Goshiki and Kuga taking a trip to the island to celebrate their wedding as part of its culture! If it’s not the end, I can definitely see it being a highlight later! We will see, however.

You can also check out other The Outerhaven reviews on your favorite social media:

This item was purchased for review.