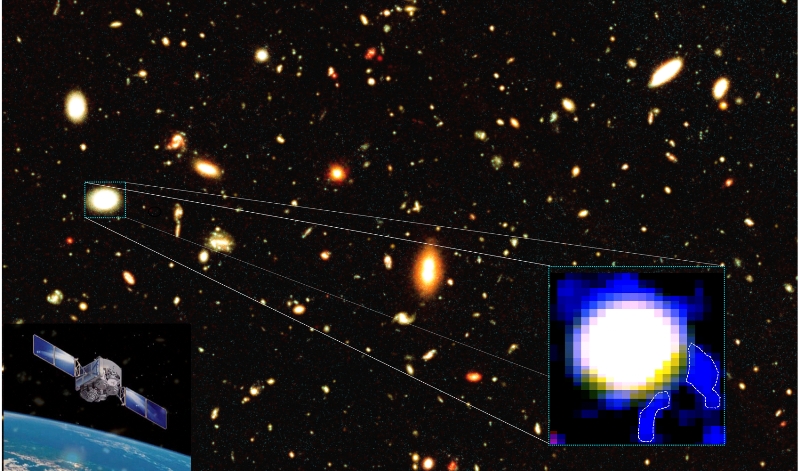 Guwahati: Anshuman Borgohain, a researcher at Tezpur University, took part in a first-of-its-kind international study that found that new stars are forming beyond the visible boundaries of a sample of distant Blue Compact Dwarf (BCD) galaxies located about 1.5 – 3.9 billion light-years from Earth.

The discovery is the joint result of a study by an international team of astronomers from India, the United States and France, designed using the Ultraviolet Imaging Telescope (UVIT) aboard AstroSat, India’s first space observatory dedicated to multiple wavelengths.

Anshuman Borgohain was lead author of a research paper on the study which was published in the renowned multidisciplinary scientific journal Nature July 20, 2022.

Anshuman works under the joint supervision of Dr. Rupjyoti Gogoi from Tezpur University and Prof. Kanak Saha from IUCAA.

“It is still unclear how past dwarf galaxies evolved into today’s. Therefore, capturing their assembly process over cosmic ages is considered one of the important links to complete the image of galaxy formation and evolution,” Anshuman said.

He also praised the imaging capabilities of AstroSat/UVIT and said, “This opens up promising avenues in the field of extragalactic astronomy.”

Co-author Dr Rupjyoti Gogoi, Assistant Professor of Physics at Tezpur University and Associate at IUCAA, said: “The current work is an inspiration to young researchers in the country as it uses the data Indian indigenous satellite, AstroSat”.

“It also showcases the glorious association of IUCAA and a university, which will surely motivate scholars working in Indian universities. We look forward to strengthening this collaboration between IUCAA and Tezpur University,” said Gogoi.

Professor Kanak Saha, co-author of the paper and professor of astronomy at IUCAA, who designed the study, said: “The resolving power of UVIT and UV deep-field imaging techniques has in indeed was the key to spotting these very young, faint and large clumps of star formation.

He mentioned that it would not have been possible to detect these distant clumps at slightly greater distances from us and that we have no such example in the current dwarf gaIaxes.

The background is a tricolor optical image taken by the Hubble Space Telescope. The small box (left) shows a sample dwarf galaxy that was observed with AstroSat’s Ultraviolet Imaging Telescope.

AstroSat has detected clusters of extremely blue star formation on the outer edge of the galaxy (3-color UV-optical image shown in enlarged box).

Dr. Bruce Elmegreen, who contributed to the study, is one of the principal investigators of the research division of IBM, in the United States.

He said: “It’s a mystery how some small galaxies like these can have such active star formation.”

He explained that these observations indicate the funneling of outer accretion gas further inward due to gravitational forces exerted by massive outer clusters.

“The discovery tells us how surprisingly star formation can take place in relatively pristine low-metallicity gas,” said Professor Françoise Combes of Paris Observatory, France, another co-author and professor at the College de France.

Professor Shyam Tandon, another co-author of this study and former professor emeritus at IUCAA, wondered if these star clusters could have been sources of Lyman continuum photons, which ionize neutral hydrogen gas.

“Understanding the birth and fate of the cosmos has always been a fascinating puzzle for mankind. The discovery of such unseen phenomena in these distant dwarf galaxies is just another piece of the puzzle and a glimpse into the unknown. that new state-of-the-art observatories are beginning to show and have to offer in the near future,” said Vice President of Tezpur University Chancellor Professor Vinod K. Jain.

Read also: GTA 6 will have a playable female character, launching in March 2024

2022-07-29
Previous Post: Samsung is likely to use the Snapdragon Flagship chipset for the Galaxy S23 series
Next Post: Google Pixel 6a vs Samsung Galaxy A53: Which affordable phone is better?