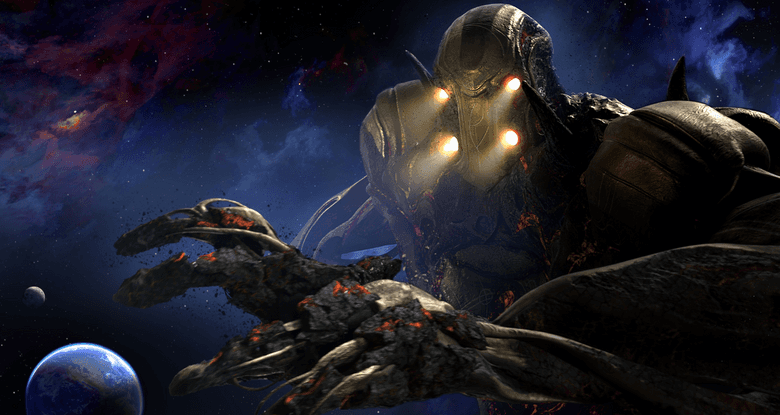 When Guardians of the Galaxy: Cosmic Return opens at EPCOT at Walt Disney World Resort this summer, get ready to take on Eson, who Marvel.com may reveal is the attraction’s antagonist!

Visitors hoping to explore and learn a little more about the region’s first-ever Otherworldly display pavilion will get more than they bargained for when Eson, a Celestial who has been observing Earth for eons, will make a surprising appearance. The Celestial seeks to “right great wrong” and the Guardians of the Galaxy – Star-Lord, Gamora, Drax, Rocket and Groot – step in to help save the day. But, they can’t do it alone and need our help to stop him from carrying out his grand plan!

What does this imply? While that remains to be seen, you just know there will still be rock tunes on the way to saving the galaxy. Check out the first glimpse of Eson from the attraction above!

While Eson may be a stranger to visitors to the Wonders of Xandar, he is no stranger to Guardians. While the Celestial Troupe and the Motley Troupe have never crossed paths before, Eson was once in possession of the Power Stone, one of the Six Infinity Stones, as the group learned in the first guardians of the galaxy film. Now he has clearly set his sights on Earth.

Guardians of the Galaxy: Cosmic Return is a brand new thrill rollercoaster developed by Walt Disney Imagineers just for this attraction. It’s a “story coaster” that will amaze guests as it spins 360 degrees throughout the attraction so the focus is always on the action, and will additionally feature a reverse launch on a coaster, never seen before in the Disney parks. It’s also one of the longest enclosed coasters in the world, which means it’s up to the task and matches the enormous scale of adventures of the guardians of the galaxy movies!

Guardians of the Galaxy: Cosmic Rewind opens May 27 at EPCOT at Walt Disney World Resort.