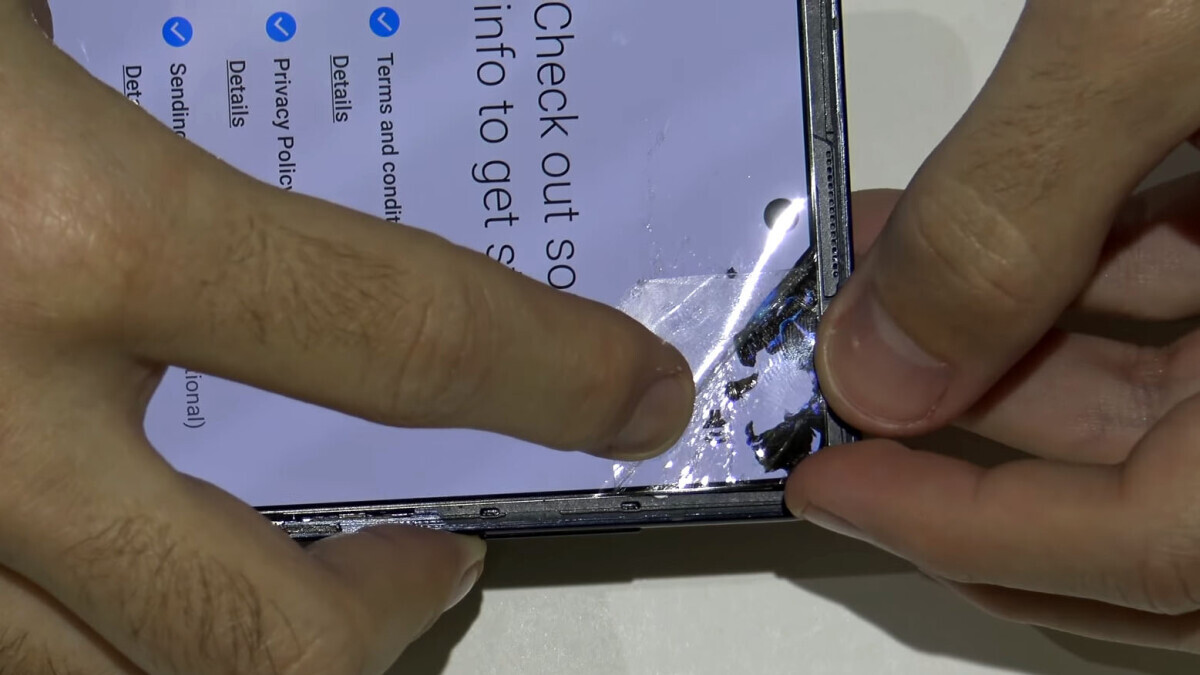 By: Adam P. Mathis
In: Galaxy series
Samsung could find itself accused in a class action lawsuit being considered in Poland by some consumers in the country who bought Galaxy Z Fold and Galaxy Z Flip series phones. 1,100 of those disgruntled customers posted their complaints on Facebook, according to SamMobile.

One of the major problems encountered by these customers is the deterioration of the protective film on the top of the foldable screen. Breakage of this coating can occur over time. The second problem, which is largely related to the first, is that Sammy’s repair centers around the country are not keen on fixing the problem with the protective film unless they are forced to do so through publications on social networks.

On the original Fold, influencers mistakenly peeled off the protective tape from their device

The report notes that in the Netherlands similar issues have occurred with the Galaxy Z Fold and Flip units. And if you can find a Samsung repair center ready to repair your device, the repair can take days. I hope you can manage this period without having a phone because Samsung will not offer you a replacement in this country. Oh, did we tell you that you also have to erase the data on your foldable before having it repaired by Samsung? It may not be an unusual punishment, but it is cruel.

Samsung says that in Poland, if the protective film begins to detach from the foldable display or is damaged, “we ask customers to visit one of our authorized service centers immediately and replace it free of charge during and during the warranty period”. But that’s not always the case as some Galaxy Z Fold and Flip owners have been turned down for a free repair.

Part of the problem is that buyers of previous Galaxy Z Fold and Galaxy Z Flip models saw their one-year warranties expire, leaving them with an expensive phone they spent over $1,000 on (nearly $2,000 in some cases) collapsing. The report also notes that even those who managed to get a free repair from Samsung ended up with a bad taste in their mouth and looking to unload their foldable. For many of these customers, a new foldable is out of the question and Samsung shouldn’t rely on them to stay brand loyal.

Samsung wants half of its smartphone revenue to come from foldables by 2025. It’s hard to say whether that’s an overly ambitious or reasonable goal. Pricing is an issue that will need to be addressed because, at current prices, considering foldables mainstream seems out of the question. Samsung’s development of a cheaper Galaxy A version of the Fold and Flip will be a big help in this quest.

The other major issue is durability. As for those unlucky Galaxy Z Fold and Flip owners in Poland, they will have to decide whether or not to pursue a class action lawsuit. These can take years to resolve and often the amount paid to each class member is a pittance. In fact, of those involved in such a lawsuit, only the attorneys involved are usually compensated substantially.

Samsung is more likely to reach a deal with these Fold and Flip owners in Poland. Such a deal would likely lead to Samsung issuing coupons to plaintiffs giving them a small token discount on the latest Galaxy Z Fold 4 and Galaxy Z Flip 4. Class members will still have the option to opt out of a settlement if they want to continue to pursue legal action at their own expense.

2022-09-16
Previous Post: The Samsung Galaxy S22 beats the iPhone 14 in four big ways
Next Post: Hrithik Roshan shares his emotional connection to the Gaiety-Galaxy Cinema as he launches Vikram Vedha’s Alcoholia with fans!