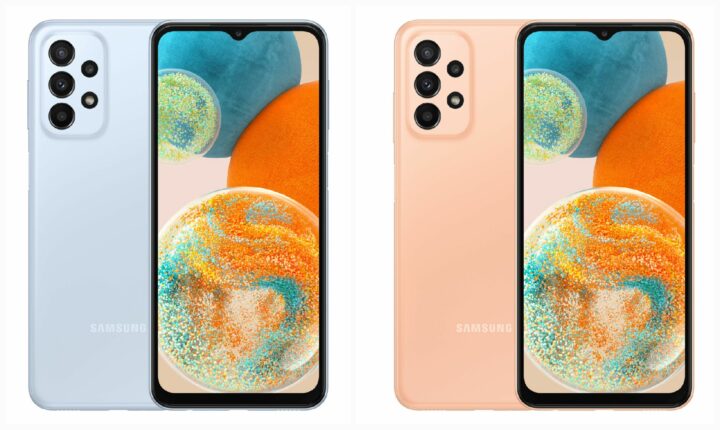 Amid all the recent leaks regarding Samsung’s upcoming Unpacked event on August 10, the Galaxy A23 5G has reappeared online through unofficial channels. Leaked renders have now revealed the overall design and color options, and we also have a full list of specs to go through.

Samsung’s next low-cost phone features a 6.6-inch FHD+ display and a quad-camera combo, including a 50MP main sensor with OIS, 5MP ultra-wide camera, depth sensor of 2 MP and a macro shooter of 2 MP. The selfie camera has an 8MP resolution and is embedded in an Infinity-V display notch. (Going through @Sudhanshu1414)

Although the Galaxy A23 5G is a low-cost phone, Samsung has big aspirations and gave the A23 a few features that usually belong to more expensive phones, like 5G connectivity and 25W charging. In other words, apart from a 50MP sensor with OIS.

In terms of raw hardware, the Galaxy A23 5G will come with 4/6/8GB of RAM and 64GB or 128GB of built-in storage expandable up to an additional 1TB via microSD. Other technical and software details include Bluetooth 5.1, Android 12, One UI 4.1 and the Snapdragon 695 chipset rather than a Dimensity solution from MediaTek.

Samsung will launch this device in at least four color options: black, blue, rose gold and white, which you can see in the image gallery below. The phone is said to weigh just south of 200 grams and measure 165.4 x 76.9 x 8.4mm.

With such precise specs now out in the wild, Samsung could be readying the Galaxy A23 5G for an imminent release. The device has already visited Bluetooth SIG, FCC and other regulatory bodies. In Europe, the phone could launch for around €300. Stay tuned.