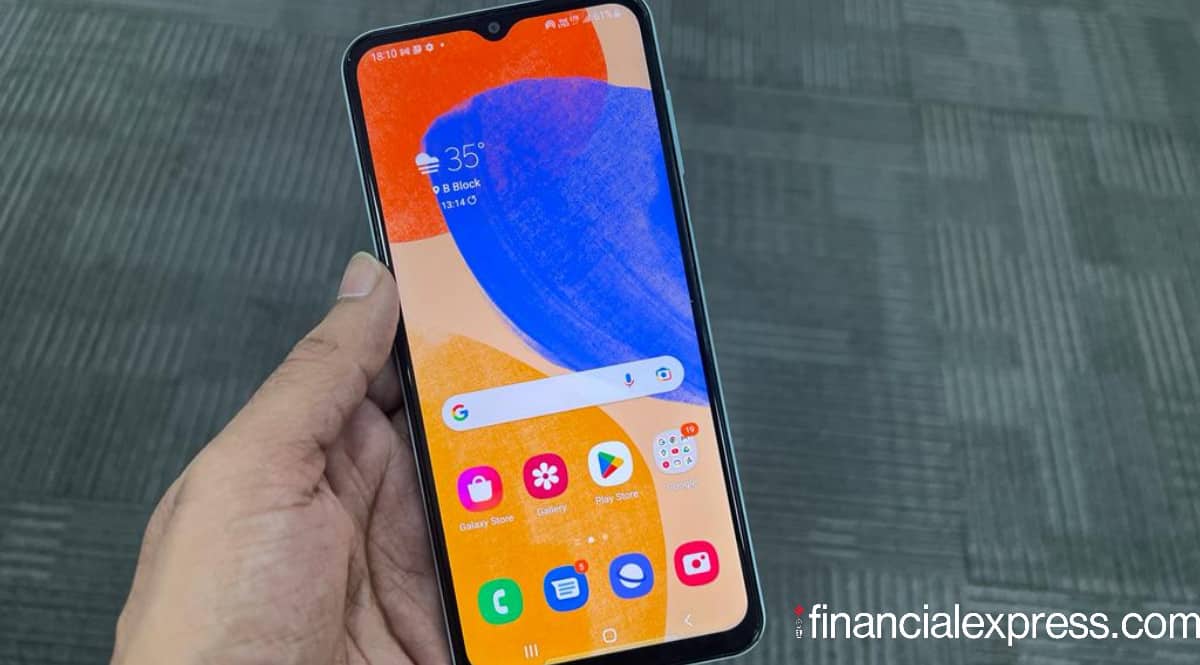 Samsung makes phones for everyone. From aesthetics to camera and power to performance, the company makes sure its broad portfolio has a phone for every preference and budget. While high-end Samsung phones often emerge as undisputed champions among their competitors due to their powerful processors or stunning design, things can get a bit tricky for the budget segment of phones. Affordable Samsung phones have to fight to prove their worth.

The story of the Samsung Galaxy F13 is no different. Launched at a competitive price of Rs 11,999, the Galaxy F13 aims to take over other budget phones like Poco M3, Realme 7i, Moto G30 and more. This Galaxy comes with a sturdy construction, an eye-catching design and several other nifty features that can give its competitors a hard time. To find out where the Galaxy F13 stands in the budget phone race, read our review.

It can be safely called one of the upcoming affordable Samsung phones with a massive 6000mAh battery size and 15W fast charging support. The phone sports a triple camera system on the back comprising a camera 50MP main and 8MP front camera.

Design and display of the Samsung Galaxy F13

Keep your Galaxy F13 on your desk and there will surely be a lot of people asking you about it. Such is the design of the Galaxy F13. Despite being a budget phone, the Galaxy F13 smartphone looks and feels great in the hand.

In the price segment that is mostly populated by bulky and cheap phones, the Galaxy F13’s polycarbonate construction and textured back make it stand out from the crowd. The phone remained fingerprint free which is honestly a great thing for me as I keep phones almost 24×7 in my hand and end up leaving multiple fingerprints specially on the back panel.

The Infinity V display makes the phone look expansive which is not yet very common in this segment. The screen is amply bright and offers no viewing complications, even at the lowest brightness setting.

The volume rocker and power button are positioned on the right side of the device while the SIM tray sits on the left. The buttons are quick and responsive. The charging port, speaker grill, and a 3.5mm audio jack are on the bottom.

The phone is available in three color shades: Waterfall Blue, Nightsky Green and Sunrise Copper. I received the Waterfall Blue variant and it looks different from the usual blue tint that is common in smartphones these days. It looks subtle and is visually appealing.

The phone comes with a side fingerprint sensor placed just below the volume rocker. Unlike the Moto G32 which I sometimes found difficult to reach, the Galaxy F13’s fingerprint reader is well placed, making it very easy to access. It’s fast and intuitive.

The Samsung Galaxy F13 can safely count battery life as its biggest selling point. It is monstrous and it does not dry up. The 6000mAh power station ensures that you won’t run out of battery power throughout the day. What dampens the spirit a bit is the slow charging speed.

It took nearly two hours to fully charge but once charged it easily cruised through a Bollywood feature film, a few videos on WhatsApp, nearly 2 hours of web and social media browsing and even then , there was some life left to go on for the rest of the day. Battery life in a nutshell is impressive.

Now let’s come to the most critical part of the package which can basically make or break the deal. Samsung phones are loaded with bloatware and this little guy is no different. The phone comes preloaded with an array of apps and bloatware which can be annoying at times, but you always have the option of deleting the apps you don’t need.

The phone runs Android 12 with Samsung UI 4.1 on top. The user interface is bright and offers several customization options. I played light games like Subway surfers and Granny. The phone worked pretty well with no lags or stutters. However, for high rollers, there are better options than this.

The phone is suitable for normal day-to-day use and you won’t find it heating up very quickly. This is a very common issue on phones these days, but the Galaxy F13 managed to maintain a normal temperature despite my using it for long hours for movies or games. Despite all the bloatware, the phone works pretty well when switching between apps or opening multiple apps in the background.

I was very disappointed with the Moto G32 camera so had my own reservations for F13 before using it. But that has changed now. The Galaxy F13 has a dual camera module on the back with a 50 MP main lens with PDAF and a 5 MP wide-angle sensor with an LED flash.

The camera app is basic and easy to use. Although you have options such as pro mode, Panorama and Food, the Galaxy F13 camera does not have night mode which is common in phones these days. There is a DecoPic option in the camera app which can be used to add live stickers to your photos and videos.

The Galaxy F13 clicks decent photos in daylight, both outdoors and indoors. The colors are vivid and close to natural. Images appear crisp, clear, crisp and have a good amount of detail. The wide-angle lens also does a good job capturing a lot of the area in the frame. Close-ups are also okay. The phone allows you to take decent videos in Full HD or HD quality.

Without night mode, clicking images in the dark becomes a bit tricky. Photos look a little shaky, look dark, and lack detail. The 8MP selfie camera is the highlight of the camera department. It offers good selfies in all lighting conditions. Photos have detail and colors appear natural.

Buy the Samsung Galaxy F13 if you want a budget phone with good looks, a decent selfie camera, and great battery life. The phone has mediocre charging speed, but the battery life makes up for it. Overall, the Galaxy F13 is a bargain if you’re willing to make a few compromises like no night mode or bloatware.