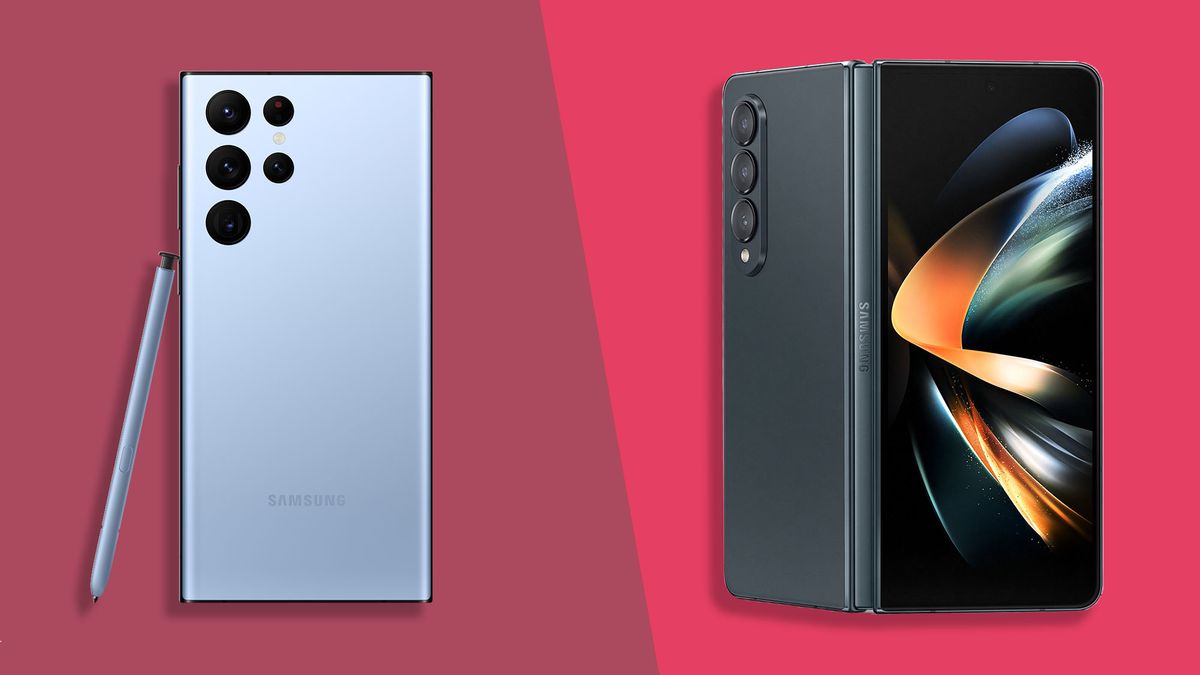 Of course, the two phones have completely different form factors. But both are elite devices with powerful components, huge (and gorgeous) displays, and unique stylus compatibility.

So what is the best Samsung phone? Here’s a side-by-side spec to help you make the right choice.

Samsung’s new foldable is clearly much more expensive than its flat sibling, no matter how you cut it.

With its solid Armor aluminum frame and square design, flat top and bottom edges and curved sides, the Samsung Galaxy S22 Ultra is a much more traditional device than the Galaxy Z Fold 4.

In contrast, the Z Fold 4 is quite radical. This may be the fourth iteration of this design, but the way it folds in half – with a large screen inside and a smaller outer screen when closed – still feels futuristic.

One way the Galaxy Z Fold 4 is more subtle than its sibling is with its selfie notch. Samsung has gone with an improved under-display option, so you can’t really see it in general use. The Galaxy S22 Ultra is equipped with a more traditional punch-hole notch.

In terms of ruggedness, the Galaxy S22 Ultra earns points for its IP68 water and dust resistance rating, while the Galaxy Z Fold 4 can only manage IPX8. Both phones give you Gorilla Glass Victus Plus on the front and back surfaces, which is more chip and scratch resistant than most other phones.

Both devices support versions of Samsung’s S Pen stylus, but only the Galaxy S22 Ultra houses one in its body. Considering its larger dimensions, this looks a bit like a missed opportunity for the Galaxy Z Fold 4.

Samsung has actually made the internal screen a bit wider than before. Apps like Outlook, Office, Teams, Facebook, and Google Meet have been tweaked to make the most of that extra horizontal space, with some giving you additional UI elements.

It will take time to beat the Samsung Galaxy S22 Ultra display in terms of quality, but similarly, nothing beats the size of this Galaxy S22 Ultra internal display. This makes the device more of a compact tablet than a phone.

The Samsung Galaxy S22 Ultra has one of the best camera phones around, led by a huge 108MP wide sensor that nailed more or less every shot we took with it, even with Samsung’s trademark overdrive. .

It is backed by two 10MP telephoto lenses, one with 10x zoom length and one with 3x. There’s also a 12MP ultrawide, and Samsung balances each perfectly in terms of color tone.

Frankly, we’d be surprised if the Galaxy Z Fold 4 could match its older sibling in the photographic stakes. All Fold devices to date have disappointed in this area.

However, Samsung seems to have taken steps to improve things this time around. First, there’s a 50MP large sensor that lets in 23% more light than the Fold 3. That seems to match the regular Galaxy S22 more than the Ultra model, though.

Samsung has given the Galaxy Z Fold 4 a 10MP 3x telephoto lens, which appears to match that of the Galaxy S22 Ultra. The latter also has a separate 10x zoom camera, of course, so it wins in the up-close and personal stakes.

Meanwhile, the Galaxy Z Fold 4 seems to match its sibling with a 12MP ultrawide.

We mentioned the Galaxy Z Fold 4’s 4MP under-display camera, but there’s also a 10MP camera on the cover display. The Galaxy S22 Ultra seems to outperform both with its 40MP selfie camera.

Both phones naturally use Samsung’s unique UI overlaid on Android 12. It’s a love or tolerate interface that impresses with its customization potential about as much as it frustrates with its bloat and clutter.

The two UIs aren’t identical, however, as Samsung has optimized its interface for the Galaxy Z Fold 4’s larger screen. This includes a new taskbar, allowing you to quickly switch between apps. It’s also much better suited to split-screen multitasking than its smaller sibling.

Given its larger size, you might expect the Galaxy Z Fold 4 to pack a bigger battery than the Galaxy S22 Ultra. You would be wrong.

While the Galaxy S22 Ultra gives you a nicely sized 5,000mAh cell, the Galaxy Z Fold 4 gives you a mere 4,400mAh equivalent. Obviously, this large foldable screen takes up a lot of space.

Not that the Galaxy S22 Ultra’s battery proved massively impressive in our tests. It’s good for a full day of varied activities, and a little more. It should be better.

We’re not entirely hopeful that the Galaxy Z Fold 4 will be an improvement, based on our experience with the Galaxy Z Fold 3. We found that it would rarely last a full day if we hit its 5G hard and his camera – which of course we did, and often.

Hopefully Samsung has improved the efficiency of its successor, but we don’t expect miracles.

Both of Samsung’s 2022 flagships are big, bold and powerful, with an added touch of the S Pen stylus for good measure.

The Galaxy Z Fold 4 will inevitably have the performance edge, and power users will no doubt thrive on its UI tweaks aimed at maximizing that massive 7.6-inch display.

However, the Galaxy S22 Ultra will likely be more manageable day-to-day, and its camera system will likely be better and more flexible. There’s a lot to be said for the fact that the S Pen is also hidden inside the body of the phone, which the Galaxy Z Fold 4 still hasn’t achieved.

We’ll know more once our Galaxy Z Fold 4 review is complete, but that will likely depend on how much you need the Galaxy Z Fold 4’s huge screen and extra performance grunt. And perhaps more relevant, how much you are willing to pay for this privilege.