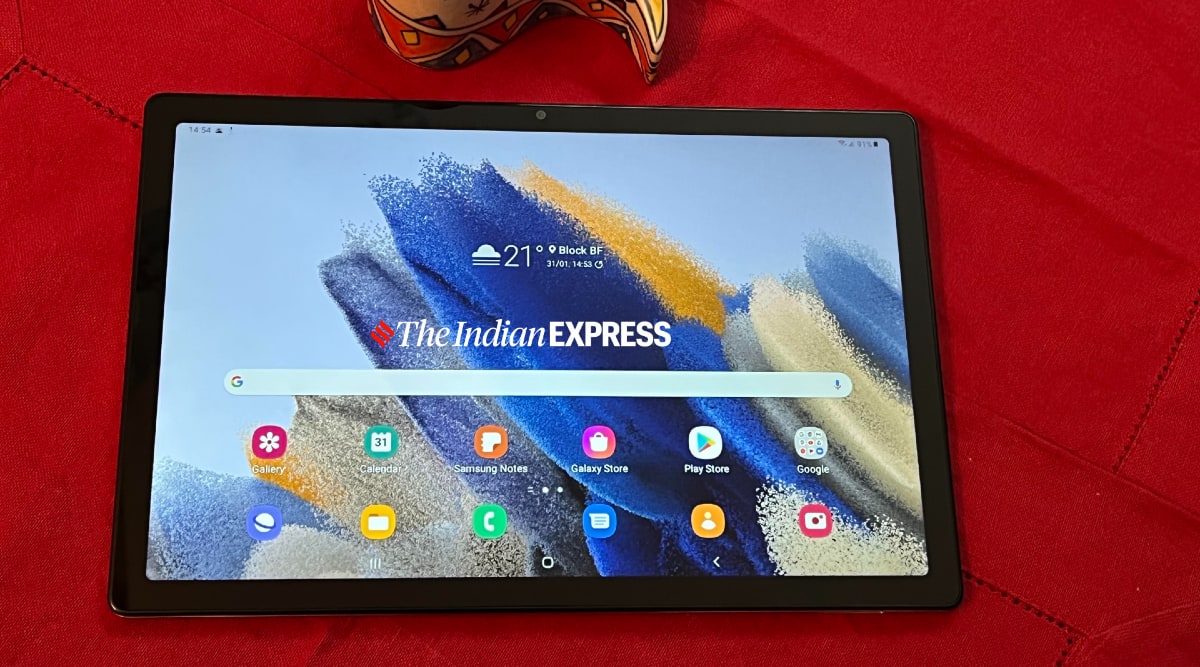 The thing about Samsung’s latest Galaxy Tab A8 is that there are no big surprises one would expect from a new device. But it’s also a good thing if you’re buying an Android tablet for the first time. AT 17,999 rupees, the Galaxy Tab A8 has a low starting price for a quality Android tablet. This will certainly make it an attractive product, especially for children. But more than that, the Tab A8 gives Samsung access to some potential future customers it might not have been able to reach before. Here is my opinion on the Galaxy Tab A8.

The Tab A8 uses the same design pattern that’s seen in the budget tablet landscape, which isn’t a bad thing. It has a 10.5-inch display with reasonably sized bezels, flat edges, a rounded rear camera pattern, and an 8-megapixel front-facing camera centered when the tablet is held in landscape mode. Measuring 6.9mm and weighing around 509 grams, the tablet is truly lightweight and can fit in virtually any bag. The casing is made of aluminum and you have the choice of picking up this tablet in gray, silver or rose gold color options. The tablet is perfectly sized, good enough that you can even hold it in one hand and read an eBook on the Kindle app for hours without getting tired.

You have the option of buying the device with Wi-Fi or Wi-Fi and 4G LTE. (Image credit: Anuj Bhatia/Indian Express)

The power button is conveniently placed on the right side of the tablet, just above the volume keys. The Tab A8 doesn’t have any sort of biometrics or fingerprint scanner, but since I’m using the tablet at home and don’t have any sensitive data stored on the device, I’m fine with this omission.

The base model only has 32GB of storage, but it supports microSD card storage expansion. There’s a headphone jack in an odd spot in the rounded corner of the tablet. Finally, you’ll notice a single USB-C port for charging and data on the bottom of the tablet. You have the option of buying the device with Wi-Fi or Wi-Fi and 4G LTE.

The front of the tablet is dominated by a 10.5-inch, 1920 x 1200px TFT LCD screen that’s bright, crisp and perfect for indoor use. I watched (and enjoyed) Netflix’s Tales of the City on the Tab A8’s 10.5-inch screen, where it looked excellent with punchy colors. In this price range, it is difficult to expect too much.
The Tab A8 is a formidable media consumption device, and there’s no doubt about it. The screen impresses whether you’re browsing, watching YouTube videos or gaming.

Another feature of the Tab A8 that influenced me is the quad-speaker system. To test it, I looked Wonder Woman 1984 and The black Knight on the Galaxy Tab A8 as well as on my first generation iPad Air. The difference is frankly staggering. The four speakers sound incredibly loud. Yes, they can get a bit harsh when you turn the volume up to max, but the sound is clear, good enough to fill the whole room.

The Galaxy Tab A8 is an entertainment device in its own right, so keep your expectations in check if you want a tablet for real work. It will not replace your laptop at any time.

Its Unisoc Tiger T618 chipset and 3GB of RAM might not make it the fastest tablet on the market, but that doesn’t mean it’s not capable of editing a piece on Google Docs or that most popular apps don’t work on it. For things like web browsing, casual gaming, video playback, and checking email, the Galaxy Tab A8 is more than adequate for those tasks. Beyond that, the Galaxy Tab A8’s performance falls flat.
I think Samsung is clear on the use case of the Galaxy Tab A8 and who really should buy this tablet. In terms of software experience, expect a user interface similar to what you get on a Galaxy phone.

Measuring 6.9mm and weighing around 509 grams, the tablet is truly lightweight and can fit in virtually any bag. (Image credit: Anuj Bhatia/Indian Express)

It runs OneUI on Android 11, and Samsung’s custom tweaks can be found like the ability to run two apps at the same time, Edge panel shortcuts, and more. However, it doesn’t support a stylus, keyboard case, or even Samsung’s DeX desktop. Software. Android is nowhere near iPadOS in terms of apps designed to take advantage of the big screen. Cohesion is lacking on Android tablets, but that’s Google’s job, not Samsung’s.

The 7040 milliamp-hour battery lasts nearly 9 hours on a single charge. That’s when I mainly used the Tab A8 for watching movies, browsing the web, reading, etc. It’s very difficult to drain the entire battery in one day as this is not a work-centric tablet.

In contrast, the Tab A8’s cameras are average. There’s a five-megapixel camera on the back and an eight-megapixel on the front. There’s nothing to write home about the rear camera, but the 8-megapixel front camera is fine for video calls, but doesn’t offer pro-level quality.

It runs OneUI on Android 11, and Samsung’s custom tweaks can be found like the ability to run two apps at the same time, Edge panel shortcuts, and more. (Image credit: Anuj Bhatia/Indian Express)

Samsung Galaxy Tab A8 review: should you buy it?