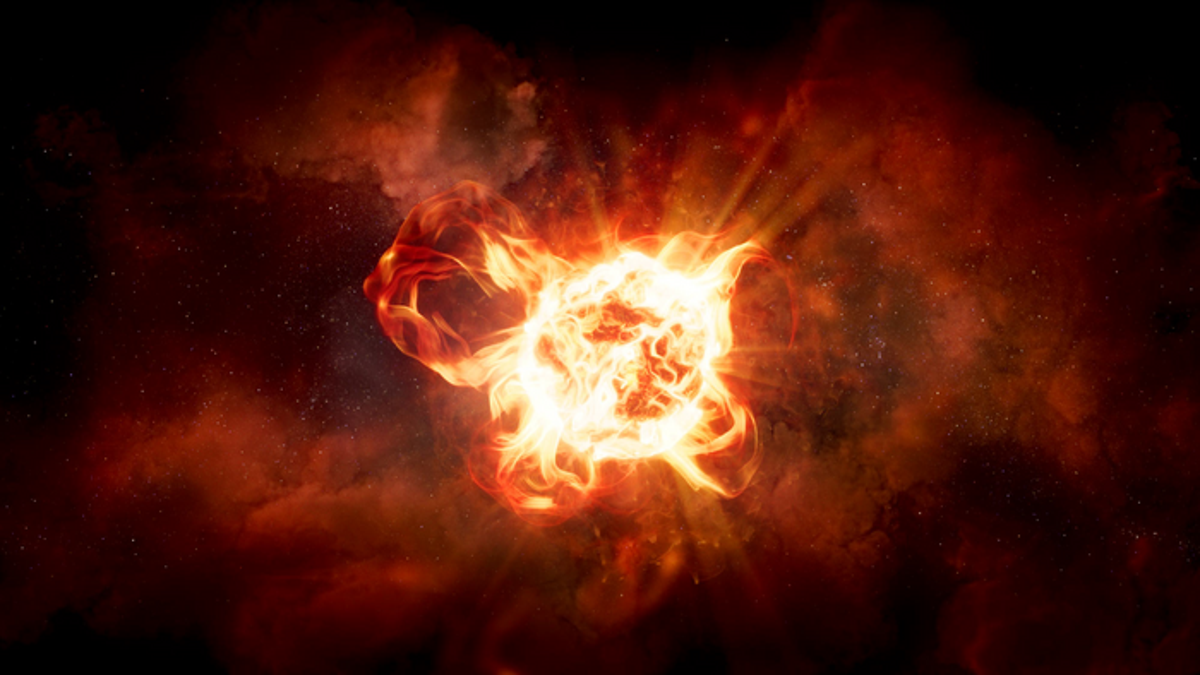 Scientists witness the death of the largest star in the galaxy

Scientists now have the most detailed image yet of a dying giant: VY Canis Majoris, quite possibly the largest star in our galaxy.

VY Canis Majoris is a red hypergiant, a class of stars so massive that they can span 10,000 times the distance between Earth and the Sun in diameter, and little is known about their final life stages. Rather than inflating into a large red sphere like most red giant stars, hypergiants inflate in irregular tumults of arcs and protrusions, going through phases where they expel large amounts of mass.

Now, an international team led by researchers from the University of Arizona has traced the arcs and mass expulsions of VY Canis Majoris, providing the clearest picture yet of a hypergiant star’s agony. The team’s results were presented June 13 at the 240e meeting of the American Astronomical Society in Pasadena, California.

“We’re particularly interested in what hypergiant stars do at the end of their lives,” said Ambesh Singh, a graduate student in chemistry at the University of Arizona. said in a press release on the work. “People thought these massive stars were just evolving into supernova explosions, but we’re not sure anymore.”

There are only a handful of hypergiants in our galaxy, and the second-brightest star in the constellation Orion, Betelgeuse, is perhaps the best known. But VY Canis Majoris, which is located about 3,000 light-years from Earth in the southern constellation of Canis Major, is the biggest of the big ones.

“Think of it like Betelgeuse on steroids,” University of Arizona chemistry professor Lucy Ziurys said in a statement. “It’s much larger, much more massive, and experiences violent massive eruptions every 200 years or so.”

To better understand these flares and the arcuate, knotted shape of VY Canis Majoris, Dr. Ziurys and Mr. Singh used the Atacama Large Millimeter Array, or ALMA, radio telescope in Chile to trace specific molecules in material ejected from the hypergiant star. They then mapped these traces onto images of VY Canis Majoris previously taken by the Hubble Space Telescope to create maps of sulfur oxide, sulfur dioxide, silicon oxide, phosphorus oxide and sulfur chloride. sodium in the material ejected from the star.

“With these observations, we can now put them on sky maps,” Dr Ziurys said in a statement. “So far, only small parts of this huge structure have been studied, but you can’t understand mass loss and how these big stars die unless you look at the whole region. That’s why we wanted to create a complete image.”

The new image could help scientists better understand where more supernova explosions have been seen in the sky. Although rare in our galaxy, there are many hyper giants across the cosmos, and their fiery deaths should be visible if that’s the typical way they end their lives, Dr. Ziurys said.

“We now think they might be quietly collapsing into black holes,” she said, “but we don’t know which ones end their lives like that, or why and how.”