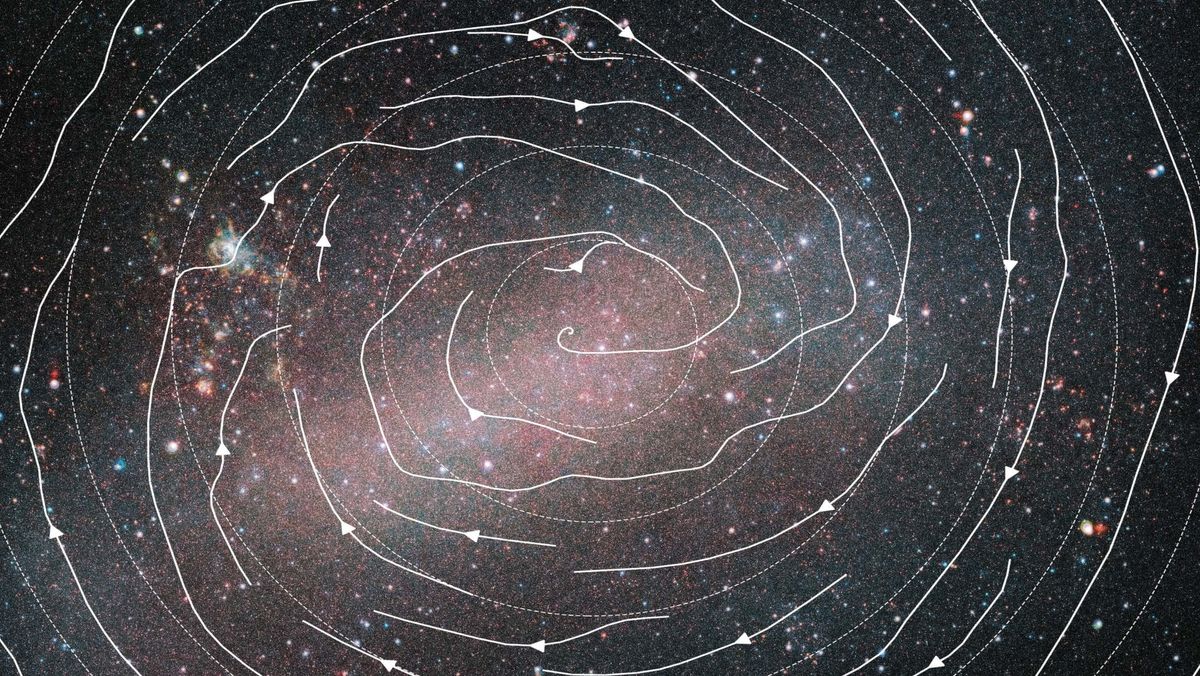 Scientists have mapped the movements of stars in the Milky Way’s companion galaxy, the Large Magellanic Cloud, revealing new clues about barred galaxies.

The results could offer new insight into the processes that shape and shape the structures of these galaxies, which contain bar-shaped bands of stars, researchers report in a new study. Located approximately 163,000 light-years from Earththe Large Magellanic Cloud (LMC) — a satellite dwarf galaxy of the Milky Way — is one of the closest galaxies to Earth and is visible to the naked eye as a faint cloud in the southern hemisphere sky. The LMC is considered an irregular galaxy, given its unique spiral arm and stellar bar structure, which is offset from the center of the galaxy.

Stellar bar structures are a common feature in spiral galaxies. Scientists believe these structures form when small disturbances within the stellar disk push stars away from their circular motions and into elongated orbits. Florian Niederhofer, a researcher at the Leibniz Institute for Astrophysics in Potsdam, said in a declaration. “These are considered the ‘backbone’ of the Stellar Bars and provide the main support for the bar structure.”

Using the Visible and Infrared Survey Telescope for Astronomy (VISTA) on the ground of the European Southern Observatory (ESO) in Chile, researchers studied the motions of stars and their elongated orbits in the LMC. The LMC is home to a variety of stars, ranging from as old as the universe to recently formed, and its proximity to Earth makes it an ideal candidate for observing the motions of these stars, the researchers said in the statement.

VISTA is designed to probe the southern sky at near-infrared wavelengths. Using this data, the researchers created detailed velocity maps of the galaxy’s internal structure, revealing elongated stellar motions that track the structure and orientation of the galaxy’s stellar bar, according to the release.

“The astonishing level of detail in the speed maps shows how much our method has improved compared to the first measurements of a few years ago,” said study co-author Thomas Schmidt, a doctoral student at the Leibniz Institute for Astrophysics, Potsdam, in the press release.

VISTA can study individually stars within the LMC and, in turn, the processes that shape and form galaxies and their stellar bar structures. The telescope offers a better understanding of stellar dynamics by observing the same stars several times over several years in order to measure the proper motion of stars. The study relied on images collected over nine years to discern the minute movement of stars as observed by the ground-based telescope.

Measurements of the proper motions of stars are needed to determine the full three-dimensional velocities of stars. However, until now only one-dimensional line-of-sight stellar velocities have been available by measuring spectroscopic Doppler shifts, or the observed changes in the light emitted by a star as it approaches or moves away from Earth. , according to the statement. .

“Our discovery makes an important contribution to the study of the dynamical properties of barred galaxies, since the Magellanic Clouds are currently the only galaxies where such motions can be studied using stellar proper motions,” Niederhofer said in the communicated. “For more distant galaxies, this is still beyond our technical capabilities.”

The results were published March 29 in the journal Royal Astronomical Society Monthly Notices.