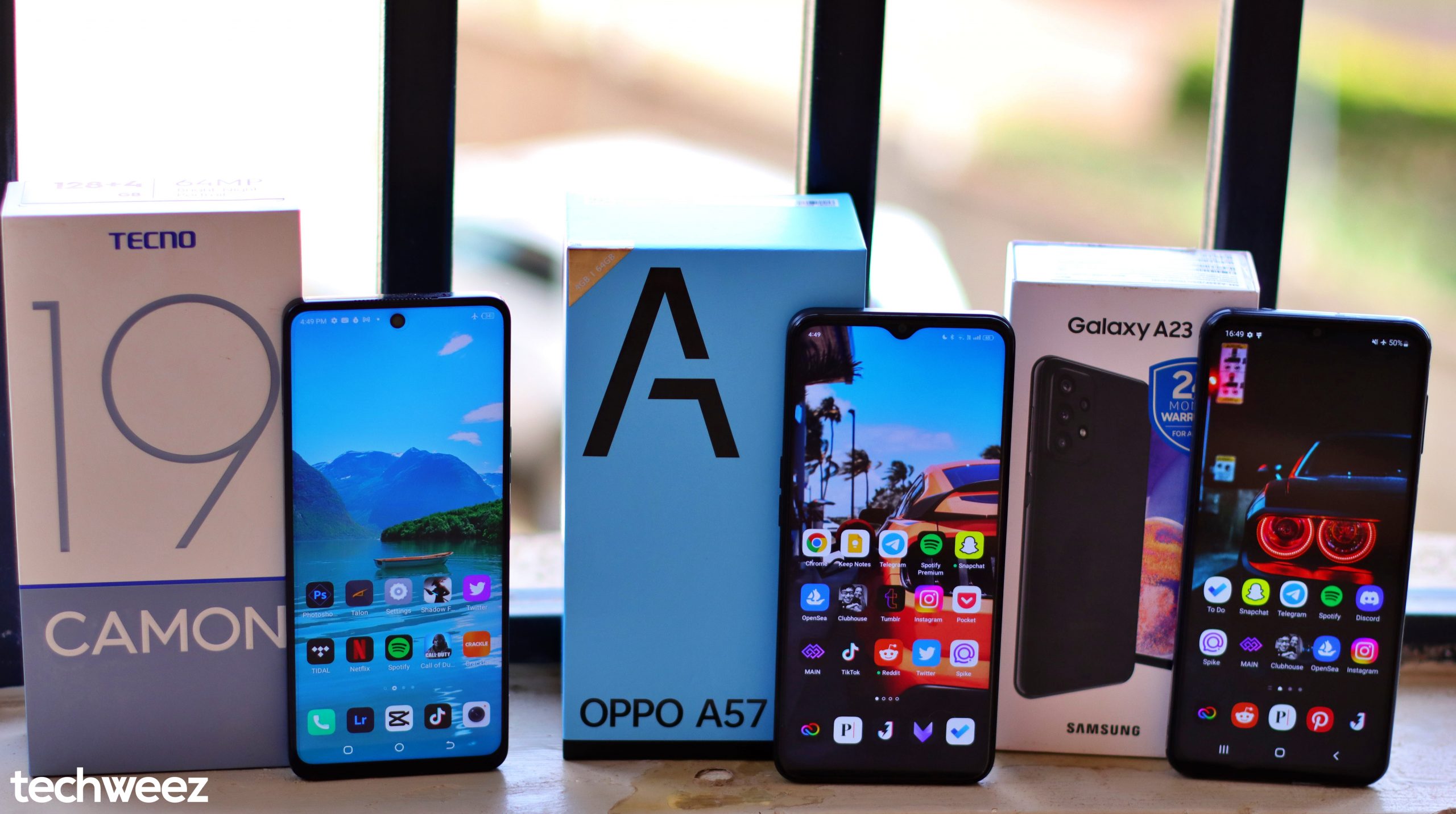 The 24K smartphone segment in Kenya is quite competitive. We got our hands on the recently launched TECNO Camon 19 and it went into a triple threat match with OPPO A57 and Samsung Galaxy A23 in our comparison review.

Design-wise, the Camon 19 has a squarer design that rocks the Star Diamond Twin-Camera design. The OPPO A57 and Camon 19 both have a matte finish which attracts less fingerprints than the A23.

Camon 19 features a stunning design of two billion “shining diamonds” that sets its design apart from any other phone in its class. The diamond-like coating of 200 million crystals provides premium texture and prevents fingerprints.

TECNO Camon 19 boasts of having the thinnest bezels at 0.98mm.

All come with excellent screens. OPPO opts for a brighter profile while Samsung and TECNO are more contrasting. Samsung wins because its pixel density is slightly higher and the 90Hz refresh rate gives it an edge over the rest.

You’ll enjoy consuming media on all three, but the high refresh rate means that with A23 scrolling, animations will be smooth and fast when gaming.

It should be noted that the Camon 19 series has already won several awards, including the iF Design Award 2022 in the product and telecommunication categories for its product design and the MUSE Design Award for Product Design Silver Award for its outstanding craftsmanship.

TECNO Camon 19 Pro comes with a 64 MP main camera which the company calls Bright Night Camera and is meant for better low-light photography. The lens is the world’s first RGB+W lens with the white pixel accepting any wavelength of light to increase sensor sensitivity and brightness.

It comes with a 2MP depth sensor and a 2MP AI camera. It should be noted that the TECNO Camon 19 lacks OIS (Optical Image Stabilization) that its bigger brother has.

The Samsung Galaxy A23 rocks a 50MP main camera with OIS and a 5MP ultra wide camera, 2MP macro and 2MP depth camera.

OPPO A57 has a dual configuration which includes a main depth of 13MP and a depth of 2MP.

Aside from the lack of OIS, the Camon 19 is already heavy.

We took them for a shootout to see how they performed in real life.

We took them for a shootout to see how they performed in real life.

In terms of selfies, they both take great photos. Samsung opts for a flatter natural look while OPPO and TECNO increase the saturation a bit. Selfies appear more on the Camon 19 ready to be shared on social media.

This also works for portraits. However, both Samsung and OPPO do a better job with background blur because you can still see background objects with this mode on the Camon 19. Samsung does so well with dynamic range for its portraits. The other two rivals overexpose their courses.

All three are good shooters when it comes to regular shots. After taking several photos with all three, the Canon 19 comes out on top its photos are more detailed, higher contrast and with excellent dynamic range. They are more colorful with presentable saturation.

I was very impressed with the performance of the Camon 19 thanks to TECNO’s AI scene recognition. The company says its AI can recognize 18 types of scenes with a new multi-dimensional hybrid portrait scene. The training dataset contains more than one million photos, which increases recognition accuracy.

All this to say that the TECNO Camon 19 takes relatively better photos compared to its rivals.

Low-light and night shots are where the differences continue to show up.

I preferred the TECNO Camon 19 shots because the same color profile for its photos carries over to low-light shots.

Compared to others, TECNO Camon 19 also took better night photos and selfies. The A23 comes second while the OPPO A57 suffers a lot.

Selfie portraits still suffer from background separation, as do daytime portraits, which TECNO can work on.

Regular portraits did very well with the Camon 19 in low-light scenarios, as you’ll see below. the A23 comes close and the A57 struggles even with night mode activated.

Overall, Camon 19 takes the crown when it comes to photography in both ideal and difficult situations.

Speaking of performance, here’s what all three have under the hood.

In terms of user interfaces, One UI 4.1 goes hand in hand with ColorOS 12. HiOS 8.6 lacks a key feature of Android 12 – Material You Theming which picks your wallpaper colors and customizes OS elements with this color.

All are slated for Android 13 when it launches later this year. TECNO says the Camon 19 will also get the upgrade late this year or early next year.

Both Camon 19 and Galaxy A23 perform well when it comes to multitasking and gaming. OPPO A57 has a less powerful processor and struggles when you tax it heavily.

The A23 lacks more storage than its closest rival, the Camon 19, but leads in performance. It has a nicer interface and the 90Hz refresh rate makes using the phone more enjoyable, especially when gaming and for general use only. This combo makes interacting with the phone a relatively better experience.

As for the batteries, all three come with 5000 mAh batteries. So you get all-day battery life and a bit more if you switch between light and moderate use. The difference is how they cool off when you run out of juice. They all have Type-C charging ports and also support fast charging with 18W, 25W and 33W for Camon 19, A23 and A57 respectively. This means that to reach 90% charge, they take 1 hour, 1 hour and 28 minutes respectively and 1 hour and 43 minutes for the A57, A23 and Camon 19.

You should now have made your choice based on your needs. Camon 19 takes the cake when it comes to photography while the A23 makes up for it with its performance. OPPO A57 comes third.

In terms of warranty, the Camon 19 comes with an extended warranty of 24 months + 1 month while the Galaxy A23 has a 24 month warranty. TECNO adds that the warranty provides free repair service during this period for failures caused by product quality. You also get 13 months of basic warranty service, 90 days of broken screen protection, and VIP service.

TECNO Camon 19 starts selling from Ksh 23,499 while Samsung Galaxy A23 costs Ksh 22,499 and OPPO A57 is priced at Ksh 22,300. You can get all three from any of the company’s respective retail stores as well as e-commerce sites like Jumia.

2022-07-30
Previous Post: Guardians of the Galaxy Vol. 3: Meet Cosmo the space dog
Next Post: How to Enable Water Lock on a Galaxy Watch Before a Swim