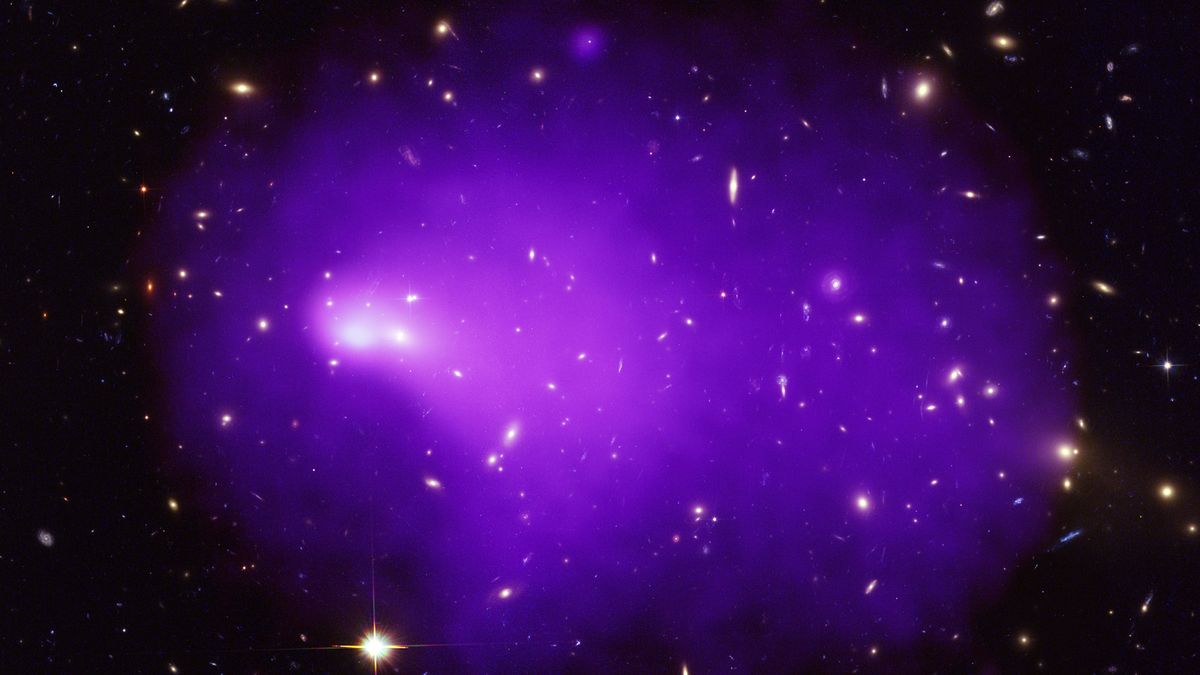 The discoveries, revealed by NASA Chandra X-ray Observatoryhelp astronomers better understand the powerful processes at work in collisions between clusters of thousands of galaxies.

Galaxies make up only a small percentage of the total mass of a galaxy cluster. The majority consists of a huge halo of black matter and a cloud of hot and diffuse gas called the intra-cluster medium that envelops the cluster galaxies. Because the gas is so hot, radiating hundreds of millions of degrees Celsius, it glows brightly in X-rays.

Related: What happens inside a huge cluster of galaxies? Scientists used 196 lasers to discover

When two clusters come into contact, the individual galaxies glide harmlessly past each other, but the gas in the intra-cluster medium experiences a much more energetic encounter, generating vast shock waves.

The particular cluster collision studied here by Chandra, Abell 2146, is located at 2.8 billion Light years a way. It is one of only three cluster collisions in the universe where the shock fronts are bright enough to be studied in detail. (The other two are the Bullet Cluster and the Abell 520.)

A team led by Helen Russell, an astronomer at the University of Nottingham in the UK, used Chandra to observe Abell 2146 for a total of 23 days – the most in-depth examination of shock waves from a cluster ever undertaken.

One of the clusters falls through the other. In doing so, it generates two shock waves: a “bow shock” at its leading edge (like at the bow of a boat moving through water) and an “upstream shock” behind it.

Using Chandra, Russell’s team measured the energy of the gas (which we might loosely think of as its temperature) in the upstream shock as rising from 6 to 8 kilo-electron volts. The gas seems to have obtained this energy mainly by the compression effect of the shock wave energizing the electrons in the gas. Basically, collisions between individual atoms and molecules are rare, because the gas is very diffuse.

Chandra measured the random motion of particles in the intra-cluster medium to be around 290 kilometers per second (650,000 mph), and these particles can travel up to 50,000 light-years, on average, before encountering a another particle. So, although Chandra measured some secondary heating from particle collisions, that heating must have happened slowly, accumulating over 200 million years.

The confirmation that most of the heating in a galaxy cluster collision is due to “non-collision” shocks allows comparisons to be made with events on a much smaller scale, here in our own solar system. The solar windfor example, experiences non-collision impacts when encountering an obstacle such as Earth, and these shocks can disrupt the planet’s magnetic field and accelerate charged particles to trigger a geomagnetic storm. By comparing the creation of these collisionless shocks at vastly different scales, scientists can better understand the physics of how shocks in cluster collisions, as well as those in solar and stellar winds, occur.

The results have been accepted for publication in the journal Monthly Notices of the Royal Astronomical Society, and a preprint is available via the arXiv database.

2022-06-13
Previous Post: Inspired by the Galaxy Z Flip, Samsung Flipbook has a secondary screen to interact with the laptop without opening it
Next Post: Strange tsunami-like quakes are shaking some of the stars in our galaxy, Gaia spacecraft reveals