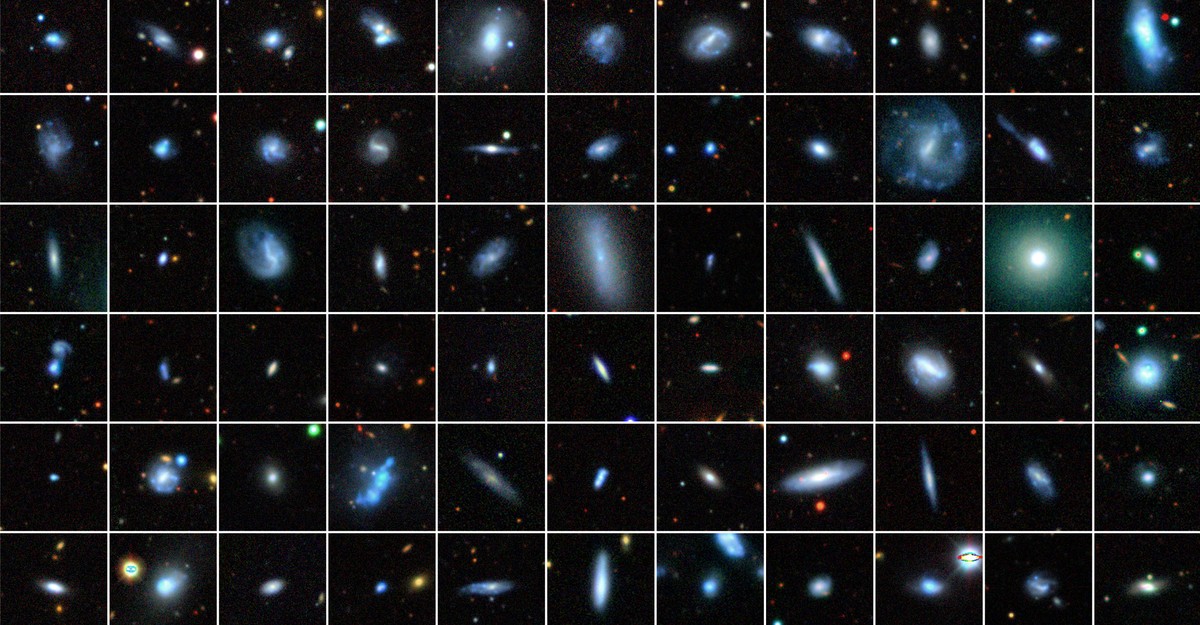 The mystery of a giant black hole in a tiny galaxy

This article was originally published by Quanta Magazine.

In 2008, Marta Volonteri helped develop a radical proposal: Astronomers should search the tiniest of galaxies for colossal black holes, towering behemoths weighing several thousand solar masses. If they could find them, she reasoned, the objects could tell us how the very first black holes in the universe formed.

The only problem was that big black holes weren’t supposed to exist in small galaxies. Shrimp “dwarf” galaxies seemed to lack the gravitational muscle needed to pack enough mass into a black hole. For many researchers, it sounded like Volonteri and his collaborators were suggesting the astrophysical equivalent of finding a brontosaurus in a bathtub.

“Black holes in dwarf galaxies were inconceivable,” says Volonteri, now at the CNRS Institute of Astrophysics in Paris.

Then astronomers began to find the beasts. In recent years, powerful telescopes and innovative observing strategies have allowed researchers to take a closer look at dwarf galaxies. When they do, black holes appear. The findings highlight how little astrophysicists know about the types of black holes that inhabit the universe and the challenges theorists face in explaining where they all come from. An increasingly accurate count could help finally explain the first and largest black holes in the universe.

“People keep finding more and more,” says Ryan Hickox, a Dartmouth College astronomer who recently helped locate one himself. “There may be a lot more of these things in these galaxies than we could find using traditional techniques.”

Dwarf galaxies are relatively uncharted astronomical territory. Ten to 100 times lighter than the Milky Way, they lack the gravitational moxie to pull themselves into the tidy round shapes conducive to theorizing. They are also uneven, dark, and generally difficult to study in detail. “They are a total mess,” Volonteri says.

But the tiny tangles of stars hold secrets that large galaxies have forgotten. Researchers believe that galaxies like the Milky Way are the quilting products over 10 billion years of mash-ups, in which galaxies repeatedly crash into their neighbours, growing larger each time. Dwarf galaxies stay small either because they have dodged encounters with other galaxies or because they formed relatively recently and haven’t had much chance of colliding yet. “These are quieter places in the universe,” says Priyamvada Natarajana Yale University astrophysicist who worked with Volonteri on the research (and who is currently a member of Quantumadvisory board of).

In this way, dwarf galaxies resemble early galaxies. During the first billion years of the universe, when galaxies were just beginning, they forged the first stars and the first black holes. Many of these galaxies collided over time and their black holes merged. Through a mixture of mergers and the engulfment of matter, the first “seed” black holes grew into the monsters with billions of solar masses that seem to lie at the heart of every major galaxy today.

Astronomers typically spot actively feeding black holes at the center of large galaxies through the blindly shining jets they emit, which drown out the surrounding stars. But at the time of Volonteri and Natarajan’s proposal, researchers had not seen clear signs of such feeding frenzies in dwarf galaxies. Many astronomers have questioned the existence of the objects.

Then, in 2013, researchers discovered the mother lode.

Read: An event so wild it could make anyone feel small

Amy Queens, an astrophysicist now at Montana State University, conducted an analysis of data from the Sloan Digital Sky Survey, looking for visible-light energetic patterns typical of partying black holes. Of the approximately 25,000 dwarf galaxies his algorithm has scanned, 151 showed signs to host growing black holes of hundreds of thousands of solar masses. These were unconfirmed candidates, but their numbers left little room for doubt: dwarf galaxies could sculpt massive black holes.

As a result, Volonteri’s proposal seemed less radical. “I said, ‘Thank you, Amy. You make me feel like a reasonable person,” she recalled.

Now astronomers have found new ways to find more of these hidden giants.

Mallory Molina, an astronomer collaborating with Reines at Montana State, stumbled upon a new technique by sheer luck. While trying to confirm one of the Queens candidates from a radio poll, Molina noticed a peculiar orange glow. The radiation was a telltale sign of iron atoms that had been damaged so badly that they had lost nine electrons – the so-called Fe X (or “Iron 10”) line. The researchers checked another candidate and found the same trait. Although neither object had the traditional appearance of a feeding black hole, it was hard to imagine what else could do such violence to the iron atoms.

Molina wrote code to search through approximately 46,000 dwarf galaxies observed by the Sloan Digital Sky Survey and found that 81 galaxies glowed pale orange from damaged iron. Molina and their colleagues claim that in these dwarf galaxies, a giant black hole heats the gas around it enough to blast electrons from their atoms. They published their findings in The Astrophysical Journal in November.

These black holes occupy galaxies beyond the scope of previous surveys, which struggled to distinguish the glow of active black holes from the dazzling glow of baby stars. (Molina compares the effort to searching for a flashlight while a spotlight shines into your eyes.) The distinct color of the Fe X line causes large black holes to appear on the background, showing that smaller dwarfs along with plenty of stellar nurseries can also host giants. black holes.

“I’m so glad to see that there are new ways to find black holes,” says Volonteri, who was not involved in the research. “They are so weak. That’s why it was so desperate.

Space telescopes have also helped reveal hidden black holes. Last year, Hickox and his student Jack Parker revisited eight borderline cases relatively close to Reines’ 2013 investigation. They pointed NASA’s Chandra X-ray Observatory at each dwarf galaxy for about four hours. One of the eight galaxies had a spot at its center that shone brighter with high-energy X-rays than with low-energy X-rays, suggesting that the radiation was passing through a cloud of dense gas – exactly the kind of cloud that could to be completely obscuring black holes in more distant galaxies. They described their findings at an American Astronomical Society conference in January and are preparing them for publication.

While the results increase the odds that many dwarf galaxies have massive black holes, which fraction has them remains hotly debated. In 2008, astronomers reportedly said the fraction was close to zero. The true number depends on the percentage of black holes that are actively feeding (and therefore glowing) and the percentage of bright black holes that are shrouded in gas and dust. If these percentages are similar to those seen in their supermassive siblings (which is currently a big if), massive black holes could reside in the majority of dwarf galaxies.

“This argument that they’re not that common is maybe starting to break down,” Hickox says.

When Volonteri first urged astronomers to determine how common black holes in dwarf galaxies were in 2008, she did so because the answer might help distinguish two explanations for a seemingly impossible discovery.

A few years earlier, the Sloan Digital Sky Survey had observed billion-solar-mass black holes dating from the first billion years of the universe. Astronomers couldn’t figure out how they got so heavy so quickly. It was like encountering a stand of towering redwoods on a still-smoldering volcanic island. Either they had grown incredibly fast, or they were already partly grown.

The finding spurred research exploring both possibilities. Some astrophysicists have developed theories of extra-gaseous environments that would allow small-seeded black holes – the corpses of early stars – to experience sustained growth spurts. Others have detailed the ways in which special circumstances could cause giant balls of gas to leap fame and collapse directly into a large seed, beginning life as a black hole already weighing thousands of stellar masses.

The Big Seed Theory has gained popularity, in part because black holes in dwarf galaxies seemed so rare, supporting the idea that a special event would be needed to restart growth. Now, some astronomers are wondering if the wave of new black holes is partly reviving the notion of small seeds.

“This kind of implies that direct collapse may not be the end in itself for the formation of the first generation of black holes,” says Molina.

Corn recent work complicated the debate. Natarajan discovered that the cosmos could produce both large and small seeds throughout its history. Still, she calls the new observations “super helpful” for discovering neglected clusters of black holes that formation theories will need to account for.

“We have an incomplete census of black holes,” she says. “The X-ray stuff is really useful in helping us discover the obscure population.”

The next big piece of the puzzle will come from James Webb Space Telescope, launched in December. The instrument’s piercing sight should spot the brilliance of black holes from even further in the past, giving astronomers a more direct view of what happened in the early universe shortly after the first seeds of black holes formed – a prospect that some researchers have anticipated their entire careers.

In 2003, while Volonteri was completing his doctorate on the theories of black hole formation, his advisor told him that “very soon JWST will be flying, and we can prove your theories right or wrong,” Volonteri recalls. “I’ve had a lot of hope since then.”

2022-03-26
Previous Post: Nigma Galaxy acquires ex-Celcius BGMI roster
Next Post: Why OnePlus and the Samsung Galaxy should fear the Nothing Phone