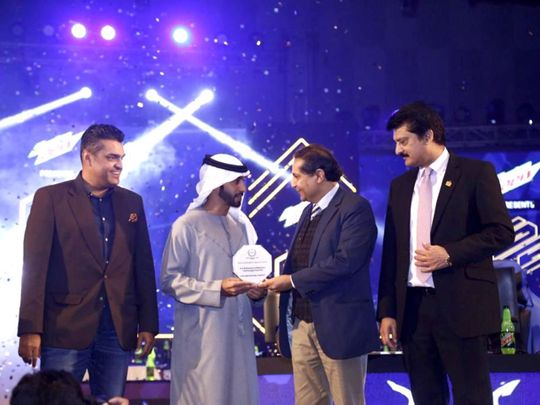 Islamabad: UAE-based Galaxy Racer, one of the world’s leading esports companies, announced an investment in Pakistan to develop the country’s esports and games industry, ushering in “a new era of technology partnership Between Pakistan and the United Arab Emirates.

The announcement was made following the approval of the Zone Business License by the Special Technology Zone Authority (STZA) for the company to operate in Pakistan, a country with over 65% young people. Galaxy Racer, which is one of the portfolio companies of Sheikh Ahmed Dalmook Maktoum Private Office, announced the company with the launch of Pakistan’s largest esports festival, “Gamers Galaxy”, to be held in Pakistan-China Friendship Center in Islamabad from January 8 to 9.

A new era of Pakistan-UAE partnership

“This tournament is the first step in unlocking the gaming potential of esports in Pakistan,” said Sheikh Ahmed Dalmook Al Maktoum. The collaboration “opens a new chapter in the history of relations between the United Arab Emirates and Pakistan”. Galaxy Racer “is delighted to come to Pakistan and start this technology investment journey with STZA,” he said, expressing his gratitude to the Pakistani government for the facilitation of the single window. UAE Ambassador Hamad Obaid Al Zaabi also attended the mega event.

Pakistani President Dr Arif Alvi virtually attended the ceremony due to COVID-19 precautions. “This is a new era of cooperation between Pakistan and the United Arab Emirates that would boost the country’s gaming industry, create enormous opportunities for our young people, and strengthen human resource development efforts.”

Break into the gaming industry

With this new partnership, Pakistan aims to break into the global gaming industry, which is currently valued at over $ 300 billion. The government wants to develop the industry, provide a platform for young people to demonstrate their talent at world events and turn their passion into a career.

STZA President Amer Hashmi welcomed Galaxy Racer, which has been granted a STZA Zone Business License to begin operations in Pakistan. “We have a very young and vibrant population and STZA is focused on developing talent to create opportunities for them to excel as Pakistan enters the massive games and esports industry,” Hashmi told Gulf News .

The investments and incentives for technological developments provided by the government “will enable young people to realize their potential, boost Pakistan’s technology industry and high-tech exports”.

At least 130 players will compete for a grand prize of PKR 20million at Pakistan’s biggest esports festival held in Islamabad. Games in the tournament include PUBG Mobile, Valorant, Valorant Spike Rush 2v2, which is Pakistan’s first-ever women’s esports tournament, and the FIFA 22 and Tekken 7 community tournaments.

Galaxy Racer Pakistan CEO Fakhr-e-Alam described the event as the “biggest esports tournament in Pakistan’s history” which will usher in a “new era of games and esports” in the country , which will help shine the spotlight on Pakistani esports superstars and provide them with a platform to showcase their talent. To cheer on Pakistani youth, Fakhr also shared the story of AboFlah, one of the biggest Arab game and Galaxy Racer content creators, who recently raised $ 10 million to support refugee families facing hardships. difficulties in the region.

The gaming industry in Pakistan

Speaking to Gulf News, Pakistani esports organization Fear Legends CEO Fawad Hafeez said events like Galaxy Gamers and government incentives are essential to harness the full potential of the esports industry. Fear Legends, participating in the “Galaxy Gamers” tournament, features 17 players from Pakistan, including five girls, all fully sponsored and earning between 20,000 and 60,000 PKR per month.

What prevents many from following their passion for the game is the fact that “parents generally consider it a waste of time and the second problem is access to the game material, which is why we guarantee young players a regular salary and incentives to become a professional esports player, ”Hafeez said.

With 110 million broadband subscribers, the Pakistani gaming scene has the potential to evolve dramatically and many young people have already made their mark. In 2015, Pakistani Sumail Hassan became the youngest player to win over $ 1 million. Lahore-based Arslan Ash Siddiqui is one of the best Tekken players in the world. Zohaib Khalid is one of the best FIFA players in the country and Shiraz ‘Sh1zzy’ is considered the best player in Dota 2.