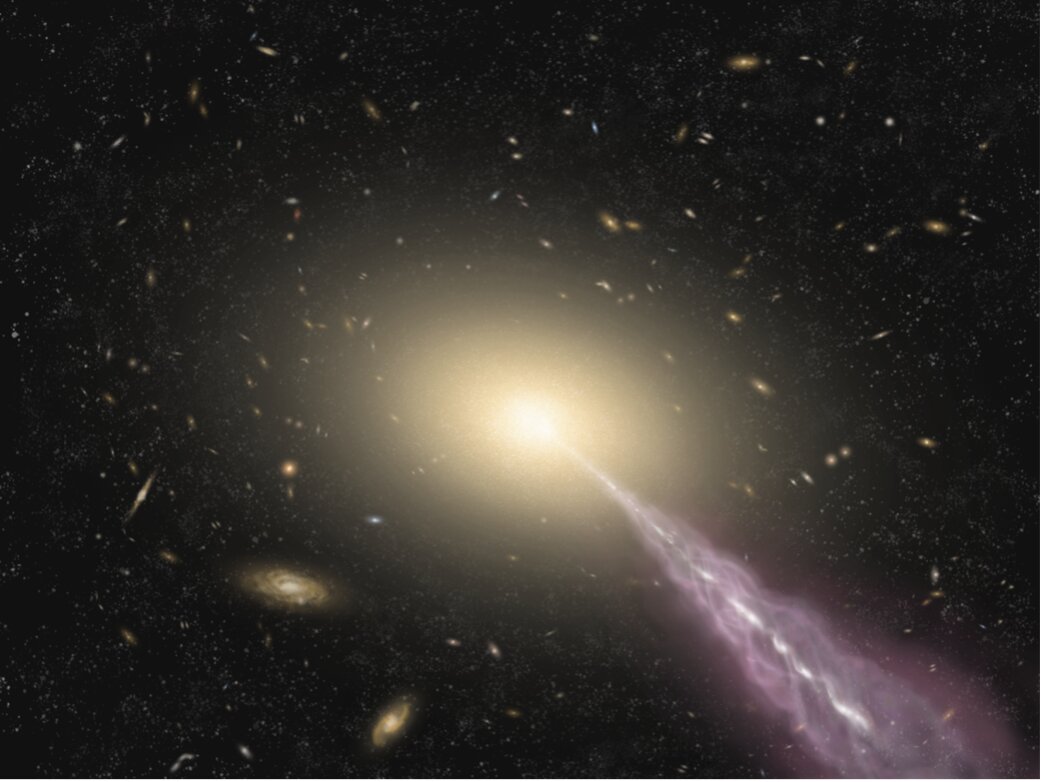 Unknown structure in the galaxy revealed by high-contrast imagery

With high dynamic range imaging, a team of astronomers in Japan have discovered for the first time a faint radio emission spanning a giant galaxy with an energetic black hole at its center. The radio emission comes from the gas created directly by the central black hole. The team hopes to understand how a black hole interacts with its host galaxy by applying the same technique to other quasars.

3C273, which lies at a distance of 2.4 billion light-years from Earth, is a quasar. A quasar is the core of a galaxy believed to harbor a massive black hole at its center, which swallows its surrounding matter, giving off enormous radiation. Contrary to its bland name, 3C273 is the earliest, brightest, and best-studied quasar ever discovered. It is one of the most frequently observed sources with telescopes because it can serve as a positional standard in the sky: in other words, 3C273 is a radio beacon.

When you see the headlight of a car, the dazzling brightness makes it difficult to see the darker surroundings. The same thing happens to telescopes when you observe bright objects. Dynamic range is the contrast between the brightest and darkest tones in an image. You need high dynamic range to reveal both bright and dark parts with a single telescope shot. ALMA can routinely achieve imaging dynamic ranges up to around 100, but commercially available digital cameras typically have a dynamic range of several thousand. Radio telescopes aren’t very good at seeing objects with high contrast.

3C273 has been known for decades as the most famous quasar, but knowledge has focused on its bright central cores, where most radio waves originate. However, much less is known about its host galaxy itself, as the combination of the faint, diffuse galaxy with the 3C273 core required such high dynamic ranges to be detected. The research team used a technique called self-calibration to reduce radio wave leakage from 3C273 to the galaxy, which used 3C273 itself to correct for the effects of Earth’s atmospheric fluctuations on the telescope system. . They achieved an imaging dynamic range of 85,000, an ALMA record for extragalactic objects.

By achieving high dynamic range imaging, the team discovered the faint radio emission extending tens of thousands of light-years above the host galaxy of 3C273. The radio emission around quasars generally suggests synchrotron emission, which comes from highly energetic events such as star-forming bursts or superfast jets emanating from the central core. A synchrotron jet also exists in 3C273, visible in the bottom right of the images. A key feature of the synchrotron emission is that its brightness changes with frequency, but the faint radio emission the team discovered had constant brightness regardless of radio frequency. After looking at alternative mechanisms, the team found that this faint and widespread radio emission came from the galaxy’s hydrogen gas fueled directly by the 3C273 core. This is the first time that radio waves from such a mechanism have traveled tens of thousands of light-years into a quasar’s host galaxy. Astronomers had overlooked this phenomenon for decades in this iconic cosmic beacon.

So why is this discovery so important? It is a great mystery in galactic astronomy whether the energy of a quasar core can be strong enough to rob the galaxy of its ability to form stars. The weak radio emission can help solve it. Hydrogen gas is an essential ingredient in the creation of stars, but if such intense light shines on it that the gas is disassembled (ionized), no star can be born. To study whether this process occurs around quasars, astronomers used optical light emitted by ionized gas. The problem with working with optical light is that cosmic dust absorbs light along the way to the telescope, so it’s hard to know how much light the gas is giving off.

Moreover, the mechanism responsible for the emission of optical light is complex, forcing astronomers to make many assumptions. The radio waves discovered in this study come from the same gas through simple processes and are not absorbed by dust. The use of radio waves greatly facilitates the measurement of the ionized gas created by the core of the 3C273. In this study, astronomers found that at least 7% of the light from 3C273 was absorbed by gas in the host galaxy, creating ionized gas 10 to 100 billion times the mass of the sun. However, 3C273 had a lot of gas just before star formation, so overall it didn’t look like star formation was strongly suppressed by the core.

“This discovery opens up a new avenue for studying problems previously addressed using optical light observations,” says Shinya Komugi, associate professor at Kogakuin University and lead author of the study published in The Astrophysical Journal. “By applying the same technique to other quasars, we hope to understand how a galaxy evolves through its interaction with the central core.”

This document is subject to copyright. Other than fair use for purposes of private study or research, no
any part may be reproduced without written permission. The content is provided for information only.