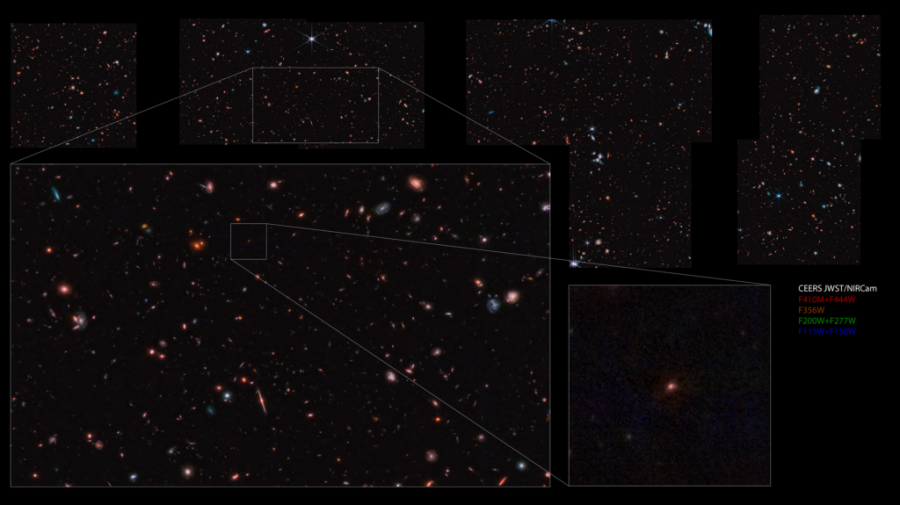 Using the James Webb Space Telescopethe largest optical telescope in space, UT astronomers along with researchers from other institutions have discovered a galaxy formed about 300 million years after the Big Bang.

Led by Steven Finkelstein, associate professor of astronomy, the Scientific investigation of the early publication of cosmic evolution The team has released photographs from the telescope illustrating what may be one of the oldest galaxies ever discovered. Principal investigator Finkelstein said his team used the telescope’s wide range and depth of field to identify the previously unseen galaxy, which he named the Maisie Galaxy after his daughter.

“(This) galaxy appeared to us as the most distant one we think we’ve found that was still quite bright,” Finkelstein said. “It’s possible that there are other galaxies more distant that are a bit fainter and need more time to study.”

The discovery is not currently published in any peer-reviewed journal, but if approved, Finkelstein said the discovery would mean the universe began forming complex galaxies much earlier than scientists initially thought.

Micaela Bagley, a postdoctoral student in astronomy, said the telescope was more powerful than the team expected.

“This telescope has been in the works for decades, and most of us on the team have been heavily focused on getting it ready for the past four or five years,” Bagley said. “We are so excited to see how amazing the footage is and how much we can learn there.”

The telescope uses a larger mirror and is optimized for infrared light, making it easier to identify distant galaxies, Finkelstein said.

“We couldn’t see into the early universe with (the Hubble telescope) because we couldn’t see the relevant wavelengths of light,” Finkelstein said. “That’s what (the James Webb Telescope) is optimized to do.”

Rebecca Larson, a PhD student in astrophysics, said the team will continue to survey the same area in December when the sighting field is visible again.

“What we have now is less than half of our full program; that’s not even half of everything we’re doing with this program yet,” Larson said. “(These images) that we posted (were) four of our NIRCam images out of 10 in total, so we will continue to fill our field.”

Finkelstein said that after the team’s mosaic work is completed in December, when they take more pictures of the sky around the Maisie Galaxy, the team will use a different telescope tool called NIR spec study the composition of galaxies.

“Essentially, you take the light from a galaxy, you split it into its component colors, and by studying that spectrum, which is what we call the rainbow, we can learn about the chemical compositions of the stars, star heat, things like that,” Finkelstein said. “It’s still much more powerful and more informative than just pictures.”